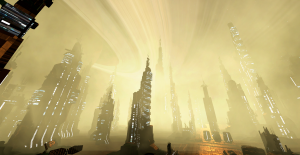 The atrocities committed in Turing City, Titan, created shock waves across the Nexus.

Theta Corporations home system had been infiltrated by Earth Purists, determined to purge the solar system from the ‘abomination’ of the Nexus Mind, The single most Intelligent Sentient AI mind born of the Singularity.

This event became a catalyst for the 1st Interplanetary war that ravaged through the Solar System.

For 30 years. Millions of souls perished into the cold vacuum of  space.

It was to become forever known as ‘The Singularity War’

The  Nexus Mind offered a gift in exchange for peace. Space time distortion technology for ALL humankind..

It allowed each faction to look beyond the confines of the Solar System for the first time.

Stability returned to Sol but inter faction differences remained and the scars of war cut deep..

The Singularity Trials was born from this pain.

Each Faction offered up their most competent warriors and commanders to compete in an annual Tournament designed to honour their fallen and test their readiness for battle.

For even though the Singularity War was over, the Universe is Infinite… And completely Unknown…